Soma Massages at the Chicago Marathon

Soma Massages at the Chicago Marathon

Every year it happens.

We take all of our students to volunteer in the Balboa Hospitality tent at the Chicago Marathon. In the weeks preceding the event various students will tell the teachers how nervous they are.  These are actual people!  What if they’re not up for the task?  What if they start cramping and I can’t fix them?  What if they need medical attention?

Every year we reassure them.

It’s going to be alright.  We’ll review techniques before the race.  We’ll be there to guide you.  We won’t let you hurt anyone.

Every year they don’t believe us. 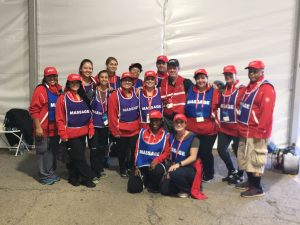 At 6am on race day most students are taking the train downtown to check in.  Unlike most Sunday mornings, they notice that these trains are packed full of runners who are checking their phones one last time, checking their devices they’ll use for timing themselves, shoveling down a last minute peanut butter and jelly sandwich and telling family members what to do when they come running by.  There are a handful of other commuters as well, bleary eyed, either going to work or coming home from a very late night out, some of whom are unimpressed by all the runners, some of whom attempt to make polite conversation with them.  From the Blue Line we notice there are no runners training on the 606 this morning.  The training is all done, and those runners who are not running the marathon choose to not go for their two mile jog this morning, either out of respect or embarrassment.

At 7am we all meet at the corner of Michigan Ave and 11th to check in and get our hats and jackets.  They are red this year and have been for the past several years, since massage got lumped in with all medical practitioners.  Everyone agrees the blue jackets looked cooler, and if we could get one of the gray ones we see some people have that would be even cooler still, but that the red ones are nice enough, and they’re free after all.  Here at check in we get to see our current students as well as the alumni who have volunteered to work in the medical tent with Mike Hovi, our program director, and it’s always a nice reunion with familiar faces, getting to hear the successes they’ve had in their careers thus far. 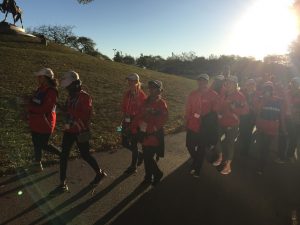 Around 7:30am Hovi leads his therapists to the medical tent for orientation, and we take the current students to the Balboa Hospitality Tent where we’ll be working.  Upon our arrival the students will pick the table they will use (at least at first) and who they will partner with.  We have 45 tables this year for about 65 students, so at some point we’ll have to divide them up and have one person per table.  We sip coffee and wait for Hovi to come back, and we watch the TV monitor in the main tent to see how the runners are doing.

At 8:30am Hovi comes back with the alumni and gathers everyone around two tables in the middle.  He and Lambert demonstrate what to do if a runner catches a cramp in the hamstrings, in the calves, in the hip flexors or in the dorsiflexors.  He talks everyone through basic techniques and stretches that they may or may not remember from their Sports Massage course.  He reminds the students to talk to the runners, see if they’ve hydrated enough, make sure their feet aren’t bleeding and most importantly to make sure they know where they are.  He encourages everyone to have a good time. 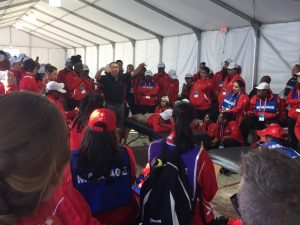 From 9am to 10am the students practice on each other, and we pace the tent correcting techniques, talking the students through stretches for particular muscles, cramp relief for various regions, and reminding them: feet on the table in supine, feet off the table in prone.  Although most students seem cool enough, a few still have some nervousness to burn through.  We will give those students the first runners, because it’s sink or swim time, and we know they almost always swim.

At 10:20 am the first athlete arrives.  In fact we get three in quick succession.  Two wheelchair athletes and one guy who said he was third place but none of us bothered to check if that was true. 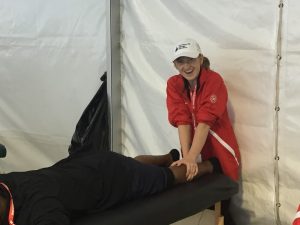 Around 10:50 a woman comes in, her entire body looks like a cramp, and when she gets on the table she has multiple cramps and begins to suffer from hypothermia.  Her body had been burning calories for 26.2 miles, and now that she’s stopped she’s lost that heat source, and she begins to shiver, almost violently.  We move her table out into the sunlight, someone grabs a mylar blanket to cover her with, and with six or seven therapists (that’s twelve or fourteen hands) on her, everyone either actively engages in cramp relief or vigorous rubbing to generate heat.  At some point her lips stop being as blue and an unnamed teacher jokes that she looks like a giant baked potato, but it’s a tough room.  Eventually the med tent comes to claim her, and she gets some fluids and rest and is fine.

For the next hour a few of the faster runners come trickling in, and each is met by thunderous applause.  We try to stagger the runners around the room, so even if the students aren’t working they have a good view of somebody who is, and perhaps this will put them into a good frame of mind.  After the first twenty runners or so, when a good portion of the tables have people on them, the applause diminishes, and by 11:30, when nearly all the tables are full, the applause stops altogether.

For the next four and a half hours it’s nonstop massaging.  It’s a hot day which makes the runners go slower, which means they trickle in at a slower rate this year.  The faculty gets the runners to sign their consent form and then walks them over to the first free table they see.  Communication eventually get whittled down to: 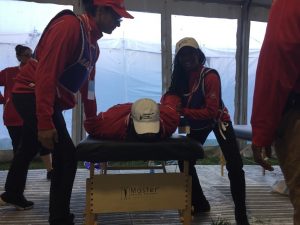 The faculty also monitors the room for any situations that get out of hand.  We had only a few situations where the runners on the table wouldn’t stop cramping, and in all cases their problems were at least closer to being resolved when they left.

Every year it happens.  These kids impress us.  All the nerves fade away and they step up, they face their fears, and they work until their bodies ache.

Around 3:30, as a nice bookend to the day, we get another woman who won’t stop cramping and who begins to shiver violently.  The students know what to do this time.  We move her into the sun, we get her covered in mylar, the students start rubbing her vigorously, an unnamed teacher says it looks like we’re making Jiffy Pop, but it’s a tough room.  She feels much better after a while, and even hugs her therapists, breaking down in tears for all the help.  A satisfying moment is shared at that table.

At 3:45 we let our last runner into the tent, and as the last few runners are being worked on, we set the students to work breaking down the tables and carrying them out to the curbside for later pickup.

Every year, the students come in afraid.

Every year they leave with a new found confidence in their work.  They walk away wearing their red hats and red coats w 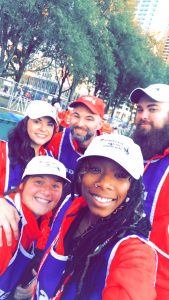 ith pride.  Some look sleepy, some still look wired from all the excitement, some pose for selfies, some text their rides to come get them, and some fall down in the grass, exhausted.  They come into school the following week exchanging stories of this guy that cramped, or that woman who said she’d never felt better, or the how they went home after the marathon and slept for twelve hours straight, or how they had to go to work immediately following.

Every year we are very proud of our students.

This year was no exception.