from the NY Times:

After two hourlong sessions focused first on body awareness and then on movement retraining at the Feldenkrais Institute of New York, I understood what it meant to experience an incredible lightness of being. Having, temporarily at least, released the muscle tension that aggravates my back and hip pain, I felt like I was walking on air. 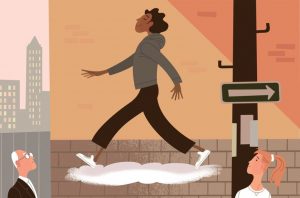 I had long refrained from writing about this method of countering pain because I thought it was some sort of New Age gobbledygook with no scientific basis. Boy, was I wrong!

The Feldenkrais method is one of several increasingly popular movement techniques, similar to the Alexander technique, that attempt to better integrate the connections between mind and body. By becoming aware of how one’s body interacts with its surroundings and learning how to behave in less stressful ways, it becomes possible to relinquish habitual movement patterns that cause or contribute to chronic pain.

The method was developed by Moshe Feldenkrais, an Israeli physicist, mechanical engineer and expert in martial arts, after a knee injury threatened to leave him unable to walk. Relying on his expert knowledge of gravity and the mechanics of motion, he developed exercises to help teach the body easier, more efficient ways to move.