In the US, about 80,000 spine procedures fail each year , and one in five patients returns for another operation. Typically, second, third and fourth attempts have an even lower chance of success, and patients continue to require painkillers over the long term. Even the procedures that surgeons deem successful, because the bones fuse and look perfect on a scan, are often unhelpful to patients. In one study, two years after spinal fusion, patients’ pain had barely been reduced by half, and most patients continued to use painkillers. Given such unimpressive outcomes, the cost of treating back pain is unacceptably high. Spine surgery costs a fortune, but other approaches, including epidural steroid injections, physical therapy and chiropractic treatment, are also expensive. 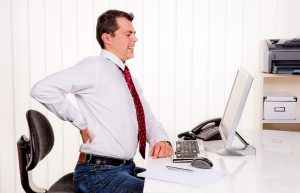 Including direct medical expenses and indirect expenses such as lost earnings, spine care costs the US about $100 billion a year. In the UK, that tab is about £10.6 billion (c$13.6 billion). InAustralia, it’s A$1.2 billion (c$950 million). Many of these costs derive from the loss of productivity, as people take time off from work. Others result from the devastation wrought by addiction to prescription opioids. In Australia, between 1992 and 2012, prescription opioid dispensing increased 15-fold, and the cost to the Australian government increased more than 32-fold.

Pain falls into four basic categories. There’s nociceptive pain, the normally short-lived kind you feel when you accidentally slam your finger in the car door. There’s inflammatory pain, a response to damage or infection, resulting in a rush of small proteins called inflammatory cytokines to the site of the casualty. That pain has a habit of spreading, to affect everything in the vicinity. Beyond that, there’s neuropathic pain, known as ‘radiculopathy’. It results, usually, from an insult to a nerve, culminating in burning, tingling or shock-like sensations that travel the length of the affected nerve (sciatic pain is a good example).